Electron paramagnetic resonance (EPR) belongs, together with the much wider known nuclear magnetic resonance (NMR), to the magnetic resonance methods. Both methods are based on the alignment of spins (electron or nuclear spin) in an external magnetic field and the possibility to induce transitions between these states using electromagnetic radiation (microwaves in the EPR, radiofrequency waves in the NMR). We apply EPR techniques to address the following research topics: 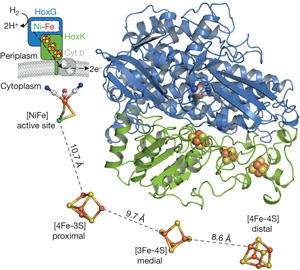 The biocatalytic splitting of molecular hydrogen into protons and electrons as well as the reverse reaction are widespread traits in the microbial world and catalyzed by the metalloenzyme hydrogenase. Here the focus is laid onto a subgroup of H2-converting biocatalysts, the so-called O2-tolerant [NiFe]-hydrogenases showing sustained H2-cycling even at ambient O2 concentration.

We aim at a basic understanding of the O2-tolerance of hydrogenases from Ralstonia eutropha, the membrane-bound hydrogenase (MBH), soluble hydrogenase (SH) and regulatory hydrogenase (RH) are addressed individually, regarding their similarities and differences, and also in comparison to standard hydrogenases. By using advanced EPR-spectroscopic techniques like FT-EPR, ENDOR, ESEEM and HYSCORE we want to elucidate the electronic structures of the metal cofactors and relate them to structural motifs, e.g. from the recently resolved crystal structure of the MBH. In focus are the wild-type protein and variants with relevant modifications at the catalytic site and the electron transfer chain. Studies on single crystals will help to assign specific metal-cluster protein interactions. The experiments are conducted under varying redox conditions to monitor the particular steps in the catalytic cycle, which are observable by EPR. Additionally we will contribute to the understanding of the assembly of the protein with emphasis on the FeS clusters by experiments on maturation product variants. In parallel we will push the development of in situ EPR spectroscopy on whole cells to relate specific cytoplasmic conditions to individual redox states of the cofactors in the hydrogenases.

This project is part of the research field E3 within UniCat and includes collaborations with the groups of P. Hildebrandt (IR/Raman), O. Lenz (biochemistry of metalloproteins), M. Kaupp (theory), M. A. Mroginski (theory), as well as P. Scheerer (crystallography). 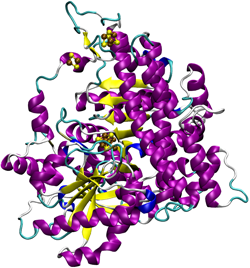 The global carbon cycle depends on the biological transformations of carbon oxides, which include the reductive incorporation of CO2 into organic molecules (e.g. in photosynthesis and other autotrophic pathways), the direct reduction of CO2 to CO or formate, the oxidation of CO to CO2 and C-C bond formation by reaction of CO with a methyl cation to form an acetyl group. Three selected Mo-enzymes will be investigated, namely the Mo-containing CO dehydrogenase (Mo-CODH), the formate dehydrogenases (FDHs) and three enzymes from the reductive acetyl-CoA pathway, namely the Ni,Fe-containing carbon monoxide dehydrogenases (Ni,Fe-CODH), acetyl-CoA synthase (ACS) and corrinoid iron/sulfur protein (CoFeSP). The active sites of the two CODHs and ACS are heterobimetallic and two different metals, Co and Ni, are involved in the key step of the formation of activated acetic acid from a Co-bound methyl-group from CoFeSP and the Ni-bound CO at ACS. The two main goals are to (A) understand how the metal centers and the surrounding protein matrix contribute to an activation and turnover of carbon oxides and (B) to develop ways to exploit this reactivity in engineered enzyme variants and complexes. All selected enzymes harbour metal sites, which are unique in nature. The role of the individual metals and their interplay will be elucidated.

Within this research project we will apply EPR techniques to paramagnetic states in Ni,Fe-containing carbon monoxide dehydrogenases, acetyl-CoA synthases and the corrinoid/iron-sulfur protein as well as Mo-containing Co-dehydrogenases and formate dehydrogenases. Thereby, we aim at an elucidation of the catalytic mechanism by obtaining information on the electronic and geometric structure of the catalytic site with particular emphasis on the substrate binding. A focus will lie on states where the molecular structure is not known yet. The EPR/ENDOR experiments will be carried out in close collaboration with the groups of S. Leimkühler and H. Dobbek. This project is part of the Cluster of Excellence "Unifying Concepts in Catalysis", project area E2.

We investigate conformational changes and alterations in the hydrogen bonding network in the light-activated ion channel channelrhodopsin (ChR), using site-directed spin labeling and EPR spectroscopy. Electron spin probes attached to the protein are very sensitive to their surroundings and can therefore be used to detect changes in polarity and hydrogen bonding. Additionally, we monitor structural changes in ChR during the photocycle using pulsed electron-electron double resonance (ELDOR) on doubly labelled ChR constructs.

This project is funded through the SFB 1078 (subproject B4) by the Deutsche Forschungsgemeinschaft.

An important part of our research interest are biological photoreceptors. In addition to the DFG-funded research on channelrhodopsin, there are two further main research projects in this area of interest:

Electron transfer in cryptochromes
Cryptochromes are a class of blue-light sensing proteins that have been implicated to play a role in the magnetoreception of birds. Their functional mechanism is thought to rely on the formation of radical pairs that can be favourably studied by EPR. In our research, we focus on elucidating the nature and functional relevance of the electron transfer pathways that lead to the formation of radical pairs, both in vivo using high sensitivity cw EPR and in vitro using time resolved transient EPR spectroscopy.

This project is in collaboration with Dr. Margaret Ahmad at the University of Paris, France.

The signalling mechanism of LOV domains
LOV domains are a class of blue-light sensing domains that are nearly ubiquitous in nature. They are of particular interest because they can bind to a wide variety of effector domains. Our focus is the elucidating of the signalling mechanism responsible for this modular approach, using both site-directed spin labelling and the flavin cofactor as an intrinsic spin probe for ELDOR and ENDOR spectroscopy.

This project is in collaboration with Prof. Andreas Möglich of the Humboldt Universität zu Berlin and Prof. Wolfgang Gärtner at the Max Planck Institut for Chemical Energy Conversion in Mülheim, Germany.

The collaborative research center 1340 “Matrix in Vision” investigates how the extracellular matrix (ECM) can be exploited for medical imaging on the example of inflammatory processes. New imaging probes will be developed for a number of clinical relevant inflammatory diseases as well as their interaction with the ECM studied. To accomplish this goal, molecular biology methods in radiology will be combined with biophysical investigations in order to understand the interaction of imaging probes with the ECM, evaluate new imaging procedures and develop quantitative imaging.

Magnetic resonance imaging (MRI) is a powerful technique in medicine, which represents a valuable tool in medical diagnostics. In order to amplify the contrast of specific tissues, sometimes the use of (venously administerd) contrast agents is necessary. The application of gadolinium-containing contrast agents is very successful due to the beneficial paramagnetic properties of the ion, which yield high contrast amplification.

From a medical point of view, it is highly relevant, to investigate the dissociation of the contrast agents and characterize alternative Gd3+ binding sites. Due to the high Gd3+ electron spin (S=7/2) electron spin resonance spectroscopy (EPR) in its various facets (e. g. cw-EPR, pulsed EPR, double resonance techniques) is very suitable method for investigating this ion. With EPR the local environment of the ion can be probed. It is e.g. possible to determine the kind of neighboring ions (provided those have magnetic properties) as well as their distances to the Gd3+, which in turn provides information on the ligand environment of the Gd3+.

Changes in the local environment of the Gd3+ are detectable via changes in the zero field splitting. These changes will be traced by EPR in a multifrequency approach. Moreover, the hyperfine interaction of Gd3+ with nuclei (like H, D, N or S), electron-electron interactions and T1/T2 relaxation times can be exploited to distinguish between different binding pockets.

For the study we use different substances, including tissues (e. g. mouse brain tissue) and cells. We measure the samples in different fields 0-6 T and frequencies (4, 9, 34, 94 GHz) at different temperatures (from 5 K to room temperature).

We continuously have Bachelor and Master projects available within this project. Please contact us for more details.

This project is funded through the SFB 1340 (subproject A03) by the Deutsche Forschungsgemeinschaft.

The efficiency of thin-film solar cells based on hydrogenated amorphous and microcrystalline silicon is strongly influenced by defects, impurities and light-induced structural changes in the absorber material. The aim of the interdisciplinary research network “EPR-Solar” was and is the development of a detailed picture of defects with particular emphasis on their structure and their impact on electronic processes such as transport and recombination in solar cells in order to support the development of strategies to prevent defect creation.

The research activities at the FU Berlin are focused on the defect characterisation and method development in the field of electron paramagnetic resonance spectroscopy as well as electrically detected magnetic resonance spectroscopy. We are closely collaborating with researcher from the Forschungszentrum Jülich, the TU Munich, the Max-Planck-Institut für Eisenforschung in Düsseldorf and the Helmholtz-Zentrum Berlin.

We intend to develop a fundamental understanding of charge transfer and charge transport in organic solar cells. For this purpose we will employ suitable EPR-based techniques. In particular, we will develop the experimental method of transient electrically detected magnetic resonance (transient EDMR). Combining the sensitivity of EDMR and the time resolution of transient EPR will provide us with the possibility to systematically investigate the interplay between charge transfer states, which are generated upon photoexcitation and subsequent charge transfer between donor and acceptor, and the photocurrent in polymer:fullerene blends.

This project is part of the DFG Schwerpunktprogramm 1601 on “New Frontiers in Sensitivity für EPR Spectroscopy: From Biological Cells to Nano Materials”.

Hybrid solar cells made from organic and inorganic semiconductors open up the opportunity for future photovoltaic devices with high efficiency and comparably low production costs. The combination of (nanostructured) inorganic and organic semiconductors is particularly promising, because the advantages of both material classes may be combined. However, the efficiencies of today’s hybrid solar cells are usually well below the efficiencies of purely inorganic solar cells and cells comprising solely inorganic absorber materials. A key point is the generally inefficient charge separation, i.e. the conversion of photogenerated excitons into separated electrons and holes at the hybrid interface.

In an interdisciplinary project (AG Weinelt / AG Bittl) being part of the FU Focus Area “NanoScale” we analyse the processes at the hybrid interface between crystalline silicon and small organic molecules on the microscopic level. We aim at developing strategies to enhance the charge transfer and charge separation yields.

Within the framework of a Helmholtz Energie-Allianz we collaborate with scientists from the Helmholtz-Zentrum Berlin, the Forschungszentrum Jülich, the Humboldt university and the Potsdam university to develop “inorganic/organic hybrid solar cells and techniques for photovoltaics“. Our research activities are focused on understanding the processes resulting in exciton dissociation and charge separation at the hybrid interface between inorganic semiconductors (ZnO, CIGS, Si) and polymers or small organic molecules.