We offer a master thesis position 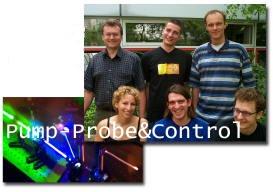 The central aspect of our project is the photo-induced control of elementary processes in simple molecules and aggregates. Control of photo-induced molecular processes has attained considerable success in recent years. It became most exciting when self-learning feedback loop algorithms were employed where tailored laser pulses can be generated, which drive the induced processes at a maximum yield along desired paths [1]. An important issue in this regard is the information coded in the optimized laser pulse shape which supplies insight about the underlying processes. Small alkali systems are suitable for this aim since they exhibit a number of bound states available for resonant transitions with weak fields which aids the theoretical description and hence the interpretation.

If you are interested in coherent control, we can help you by finding, arranging, and adjusting your own pulse shaping setup and we provide the suitable optimal control software.

In this project the control of molecular prozesses is demonstrated for alkali systems. Thereto, we performed closed loop optimizations on alkali dimers in a supersonic beam in order to maximize the ionization yield. Furthermore, isotopomer selective optimizations are examined regarding the efficiency of the optimization procedure for the weak differences between the isotopic species [2]. Surprisingly large enrichment factors are found and information about the dynamics on the involved vibrational states is extracted from the optimal pulse shapes, which provides a new spectroscopical approach of yielding distinct frequency pattern on fs-time scales. These experiments are compared with optimal control calculations in order to decipher the underlying processes in detail [3,4].

A main aspect of our work is the development of novel optimal control method in order to extract the most relevant information from the optimized laser field. One approach examines the implementation of genetic pressure within the algorithm for performing control pulse cleaning where extraneous pulse features were removed to expose the most important structures. This leads also to first investigations on multi-criteria optimizations [5]. Another method addresses parametric optimization by introducing physically relevant pulse parameters employing a computer assisted sub pulse encoding in order to narrow the search space and to aid the interpretation. Moreover, novel pulse shaper schemes for combined phase, amplitude, and polarization pulse control were developed and applied on alkali dimers, even in a parametric encoding. The results demonstrate the perspectives of adding a new dimension by including also the polarization and hence all properties of the light field in the pulse modulation [6]. 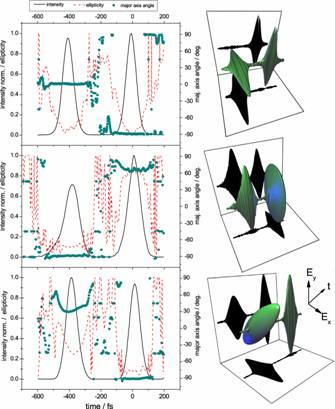 The figure shows parametrically shaped pulseforms where the phase, amplitude, and polarization are subject to modulation. On top are two linear polarized perpendicular sub pulses, in the middle a linear and a circular polarized subpulse, and the lowest figure shows two sub pulses with the major axes at 90° and 30° to the horizontal x-direction, respectively.

Currently, coherent control was applied to ultracold trapped ensembles motivated by the perspective to perform photoassociation and photostabilization of alkali systems. This work was performed in collaboration with the group of Prof. M. Weidemüller (Freiburg). First results were received regarding optimized multi-photonic excitation to molecular ions and pump-probe experiments exposing signal oscillations. They provide indications for photoassociation and open the perspective for transitions to lower vibrational levels in the electronic ground state, which would be a first step to an internally cold molecular Bose Einstein condensate. 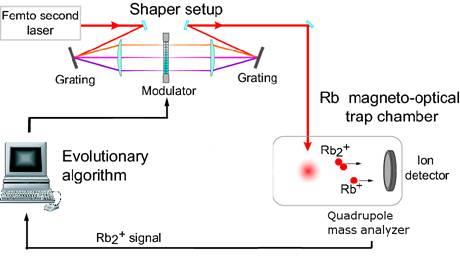 This figure shows the experimental setup for the optimization of the Rb2 ionization in a closed loop. The shaped laser pulses interact with the trapped atoms. Afterwards the produced ions are mass selected by a quadrupol and detected by a following channeltron. The number of molecular ions acts as a feedback signal for the optimization algorithm, which controls the modulator.

For the experiments on the ultracold ensembles we also utilize a self-build NOPA (Non-collinear Optical Parametric Amplifier) for ionization. Its characteristics are explained in the following. 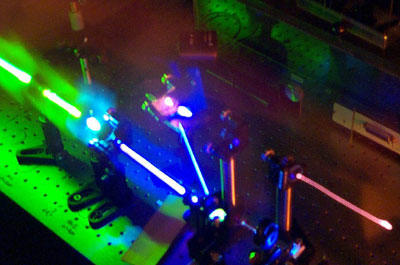 NOPA1 is a white light continuum seeded optical parametric amplifier (OPA) able to generate extremely short pulses. It is pumped by the second harmonic of fs pulses coming from CPA systems. As a seed a white light continuum produced in a sapphire plate is used. Parametric amplification is archieved in a BBO crystal and it allows to access a tuning range from 470nm to 650nm. Comparing to OPA systems, the outcoming pulses can support broader spectra, so it allows the generation of shorter pulses. They can be even more than 5 times shorter then pump pulses. Based on this properties and its wide tunability, the NOPA is a perfect tool for modern femtosecond spectroscopy. 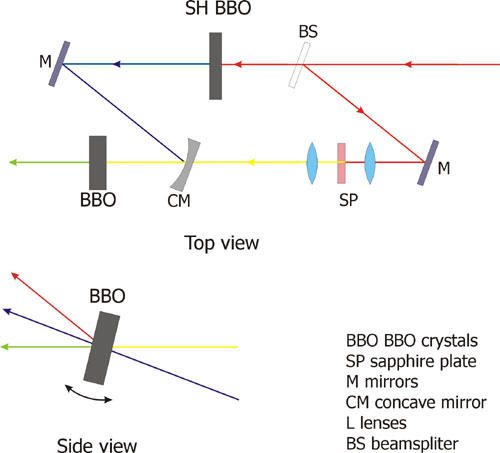 Another project of our group is the transmission of polarization shaped femtosecond pulses through optical fibers. Dispersion and birefringence of fibers induce severe distortions of the pulse shape. The aim is here to invent pulse shaping techniques to compensate for these distortions. We were able to demonstrate the generation of polarization shaped pulses after propagation though a hollow core photonic crystal fiber [7].

To generate a pulse sequence of two short perpendicular pulses on the distal side of the fiber, fist the phases a) , are written on the modulators. The arrays a and b shape are used for phase and amplitude shaping and therefore compensate for the fibers dispersion. The polarization shaping is done with the arrays c and d, which are also used to to compensate for the fibers birefringence. In spite of the chaotic appearance of the pulse shape before the fiber b) the desired shape of pulse after the fiber c) is generated.