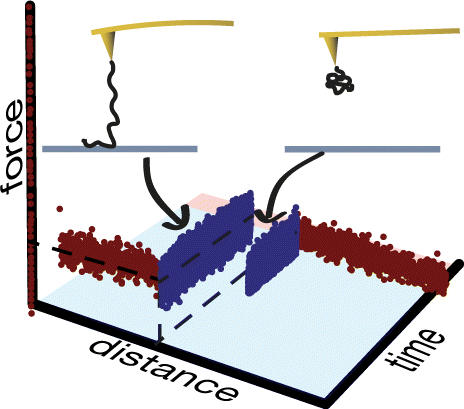 We use a combined experimental/theoretical approach to determine the intrinsic monomeric desorption rate k0 of polytyrosine and polylysine homopeptides from flat surfaces. To this end, single polypeptide molecules are covalently attached to an AFM cantilever tip and desorbed from hydrophobic self-assembled monolayers in two complementary experimental protocols. In the constant-pulling-velocity protocol, the cantilever is moved at finite velocity away from the surface and the distance at which the constant plateau force regime ends and the polymer detaches is recorded. In the waiting-time protocol, the cantilever is held at a fixed distance above the surface and the time until the polymer detaches is recorded. The desorption plateau force is varied between 10 and 90 pN, by systematically changing the aqueous solvent quality via the addition of ethanol or salt. A simultaneous fit of the experimental data from both protocols with simple two-state kinetic polymer theory allows to unambiguously disentangle and determine the model parameters corresponding to polymer contour length L, Kuhn length a, adsorption free energy λ, and intrinsic monomeric desorption rate k0. Crucial to our analysis is that a statistically significant number of single-polymer desorption experiments are done with one and the same single polymer molecule for different solvent qualities. The surprisingly low value of about k0 ≈ 105 Hz points to significant cooperativity in the desorption process of single polymers. doi