The operating speed of devices based on magnetoresistive effects is determined by the time it takes to reverse the magnetization direction in one or more ferromagnetic layers in ultrathin films and multilayers. A thorough understanding and control of the relevant mechanisms linking the processes occurring on ultrashort timescales to the magnetization dynamics follow­ing on longer timescales until the system settles back into a stable and addressable state is inevitable for establishing faster switching schemes.

In order to gain a comprehensive insight into the interplay of ultrafast demagnetization, spin currents, and thermal effects, and to describe the dynamic behavior on all timescales, we conduct pump–probe experiments with laser pump and x-ray magnetic circular dichroism (XMCD) or magnetic linear dichroism (XMLD) probe. The sample is excited by ultrashort (< 100 fs) laser pulses and its response stroboscopically recorded by XMCD or by magnetic microscopy using photoelectron emission microscopy (PEEM) with XMCD magnetic contrast. The focus is on multilayered samples in which materials with different spin structures are in contact to each other. This research is part of project A07 of the Collaborative Research Center/Transregio 227 "Ultrafast spin dynamics", Berlin–Halle.

Controlling magnetic order at high speeds requires the ultrafast manipulation of the spin degree of freedom. Ultrashort optical pulses have been established as a route toward such ultrafast control of magnetization. In this context, materials that can switch between antiferromagnetic (AFM) and ferromagnetic (FM) order on ultrafast timescales could offer unprecedented opportunities.

In the example presented here, a multilayer of FM Co and AFM Mn layers is excited by ultrashort infrared laser pulses. Element-resolved XMCD in reflectivity, carried out in stroboscopic pump–probe mode at the Fe and Mn L3 edges, shows a partial laser-induced demagnetization of the Co layers on a subpicosecond time scale (red data points) and an ultrafast transient ferromagnetic state in Mn, being present during the duration of the laser pulse (blue data points). 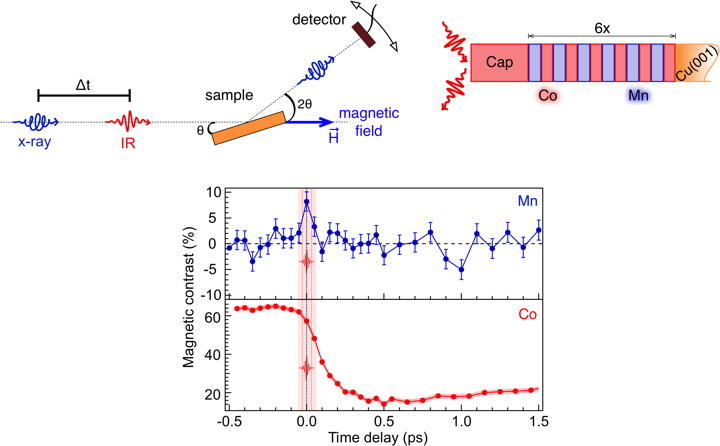 The ultrafast ferromagnetic state of Mn can be understood by a mechanism called "optically induced intersite spin transfer" (OISTR). It is of pure optical origin. Spin-selective transfer is taking place between neighboring atoms driven by the oscillating electric field of the light pulse. Coherent transfer of Co majority electrons to Mn atoms on the femtosecond timescale leads to the observed ferromagnetic state in Mn. This observation showcases the creation of a transient FM state in a monoelemental antiferromagnet that can play an important role in ultrafast optospintronics.

The figure depicts on the left XMCD-PEEM images of two near-parallel domain walls in an FeGd film with small domain wall pinning. Arrows indicate the local magnetization directions. Red ellipses mark the different positions of the laser footprints on the sample set in the experiment, labeled “1”, “2, and “3”. Panel (a) shows the starting configuration. Applying one, two, and three pulses at position “1”, in the middle of the black domain, shifts the two domain walls away from the laser spot, shown in panels (b) through (d), respectively. Colored straight lines mark identical positions in each image to better see the motion of the domain walls. The result of nine laser pulses applied to position “2” is shown in panel (e). The left domain wall has now moved back to the right, even further than the position it had started. Placing the laser spot on position “3”, right of the right domain wall, did not result in further changes to the domain pattern, probably because of some stronger pinning of the domain wall at that place. The evaluation of the positions of the two domain walls along the blue axis shown in panel (a) after each laser pulse is depicted in the graph on the right hand side. The amount traveled by the domain walls decreases with the distance from the laser pulse. The maximum distance is nearly one micron. Since the excitation by the laser pulse is much shorter than the time it takes for the domain wall to travel such distances, we attribute the unidirectional steering of domain walls by the laser pulse to the inhomogeneous temperature distribution on the sample after the laser pulse, which decays much more slowly. Magnonic spin currents, induced by the spin Seebeck effect, could then in principle lead to the observed domain wall motion if reflection of magnons at the domain walls is taken into account.