Research in the AG Kuch

A read head of a magnetic hard disk contains a trilayered magnetic structure as sensor.

To explore the fundamental effects that determine the behavior of such trilayered structures is one of the objectives of the research group.

The main object of research in the AG Kuch are nanoscopic magnetic systems such as molecules adsorbed on solid surfaces or ultrathin films including multilayers, surfaces, and patterned structures. We aim at the fundamental investigation of new functional properties that are important, or may become important, for applications in magnetic data storage technology, magnetic sensors, or magnetoelectronic devices. Emphasis is put on the dynamic behavior of such systems at ultrashort time scales.

Our research employs a variety of different measurement techniques that are either implemented in our labs at the physics department of the Freie Universität in Berlin-Dahlem, or at BESSY in Berlin-Adlershof, where we make use of synchrotron radiation.

The operating speed of devices based on magnetoresistive effects is determined by the time it takes to reverse the magnetization direction of one or more ferromagnetic layers. A thorough understanding and control of the responsible processes on all relevant timescales, from the ultrafast excitation of the magnetic system on the sub-picosecond timescale to the magnetic damping in the nanosecond regime, is inevitable for establishing faster switching schemes. As part of the transregional collaborative research center Sfb/TRR 227 "Ultrafast Spin Dynamics", we study the magnetization dynamics of layered magnetic systems in the time domain. The sample is excited by ultrashort laser pulses or magnetic field pulses while the response is stroboscopically investigated by magnetic spectroscopy with synchrotron radiation, employing X-ray magnetic circular dichroism (XMCD) to obtain magnetic information. Element-resolved microscopic magnetic domain images acquired by photoelectron emission microscopy (PEEM) reveal the influence of, for example, coupling effects in magnetic multilayer systems for the fast magnetization reversal of one of the layers or the manipulation of magnetic domain walls by single ultrashort laser pulses.

The rapidly progressing miniaturization in microelectronics leads to the vision of using molecules as functional parts of a future molecular nanotechnology. We explore the magnetic properties of molecules and metal-organic surface assemblies on solid surfaces and how they can be reversibly manipulated by external parameters. We use mainly spectroscopic techniques to extract element-resolved information.

In recent research we tackled magnetic coupling phenomena in such systems, and the reversible switching of molecules at surfaces, for example in adsorbed spin-crossover (SCO) molecules, which can be reversibly switched between a low-spin state and a high-spin state. Techniques we use include x-ray absorption spectroscopy (XAS) and photoelectron spectroscopy (XPS).

Ferromagnetic materials that are brought in contact with antiferromagnets usually exhibit a strongly enhanced coercivity and a shift of the magnetization loop along the field axis. The latter is termed "exchange bias", and is frequently applied in magnetoresistive devices to manipulate or pin the magnetization direction of ferromagnetic layers in a multilayered stack.

In antiferromagnetic materials the direction of atomic magnetic moments systematically varies from one atom to the next. Thus a structural characterization of the interface on the scale of atomic distances is crucial. We tackle this issue by growing single-crystalline ultrathin antiferromagnetic films, like FeMn, NiMn, or CoO, on suitable single-crystal substrates, where we can characterize structure and morphology by LEED and STM. The magnetic interaction with an adjacent ferromagnetic film is studied by MOKE, XMCD, MLD, and PEEM.

The methods we use include: 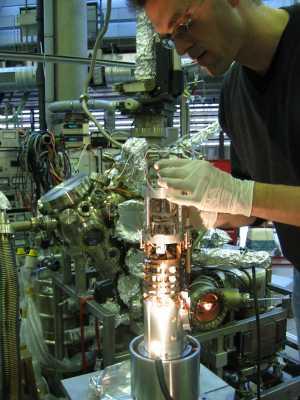