We study metal-organic structures on solid surfaces, which can be ensembles of adsorbed molecules or self-assembled systems of organic molecules and metal atoms, by synchrotron-radiation-based x-ray spectroscopy. Near-edge absorption fine structure in x-ray absorption spectroscopy (NEXAFS) yields the adsorption geometry and, together with x-ray photoelectron spectroscopy (XPS), gives information about the electronic properties. Magnetic properties are determined using x-ray magnetic circular dichroism in x-ray absorption (XMCD). Our goal is to control in a defined way the magnetism of such structures. To that end, an improved understanding of the magnetic properties and the relevant mechanisms responsible for magnetic coupling between metal atoms or between adsorbate and substrate is imperative.

Spin-crossover molecules are a particular class of molecules that change their magnetic moment as a function of temperature or by illumination with light. If they can be adsorbed on a metal surface while maintaining their spin-crossover properties, they will comprise interesting building blocks for molecular magneto-electronic logic devices. We have achieved a thermally induced, fully reversible spin crossover in submonolayers of [Fe(H2B(pz)2)2(phen)] and [Fe(H2B(pz)2)2(bipy)] deposited on a highly oriented pyrolytic graphite (HOPG) substrate in ultrahigh vacuum, as proven by x-ray absorption spectroscopy measurements. Furthermore, even at lowest coverages, these molecules exhibit clear signs of cooperative switching behavior, as demonstrated in the figure below. Cooperativity is one of the most important issues for research on spin-crossover materials, since it is responsible for the bistability in the spin states, which is crucial for applications. 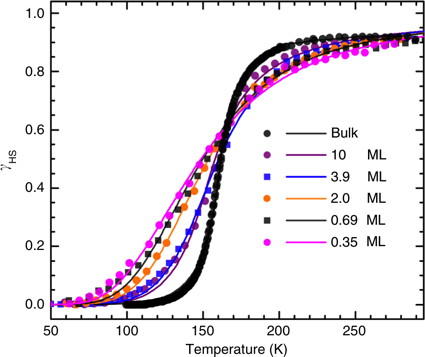 The figure shows the fraction of molecules in the high-spin state as a function of temperature for different coverages (in monolayers, ML) of [Fe(H2B(pz)2)2(bipy)] on HOPG (bulk data are from Moliner et al.). The steepness of the temperature-induced transition between low spin and high spin is indicative of its cooperativity. While for submonolayer coverages, the transition is found to be more gradual than expected for noninteracting molecules, starting at 2 ML the curves become steeper. This means that the probability of a molecule on the surface to switch is influenced by the spin state of its neighbors, making it more likely to switch to the same spin state at higher coverages and to the opposite spin state at submonolayer coverages. These findings are relevant for nanoscale applications relying on spin-state bistability.

Example 2: Ring-closing reaction of an Fe porphyrin on Au(111)

On-surface reactions are a promising way of modifying molecules and obtaining new molecular arrangements, frequently difficult or impossible to obtain otherwise. It is known that iron octaethylporphyrin (FeOEP) adsorbed on Au(111) undergoes a dehydrogenation reaction when heated to 600 K in which the eight ethyl groups form four benzene rings, resulting in the iron tetrabenzoporphyrin (FeTBP) molecule (see figure below). 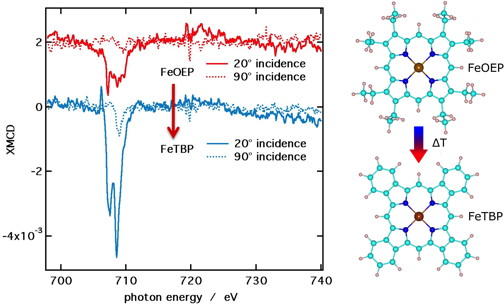 This on-surface ring-closure reaction, although occurring at the periphery of the molecule, results in a significant change of the magnetic properties of the central metal ion, as seen from the x-ray magnetic circular dichroism (XMCD) spectra in the figure. Supporting density-functional theory calculations revealed that this is mainly due to a change in the molecular conformation, which is flat in FeTBP, but buckled in FeOEP. This result shows that the exploitation of intramolecular reactions on surfaces is a viable path to obtaining new molecules with suitable magnetic properties for their use in spintronics.

These experiments have been conducted in collaboration with Ehesan Ali and Peter Oppeneer from Uppsala University and Constantin Czekelius from Düsseldorf University.

Endohedral fullerenes are nanometer-sized objects that contain atoms inside a carbon cage. The carbon cage helps to isolate encapsulated magnetic species from aggressive environments and can confine three rare-earth ions in a relatively small space. We have investigated the magnetic coupling in C80 fullerenes, filled with Gd3N (see figure). We have discovered a ferromagnetic coupling between the gadolinium moments inside the same molecule. If the molecules are adsorbed on a ferromagnetic Ni film, they also interact with the substrate through the carbon cage. There are at least two different species of Gd3N@C80 on Ni: A more abundant one that couples weakly antiferromagnetic to the substrate, and a more strongly ferromagnetically coupled, but less abundant one. This leads to a peculiar change in the sign of the Gd magnetic moment as a function of temperature. 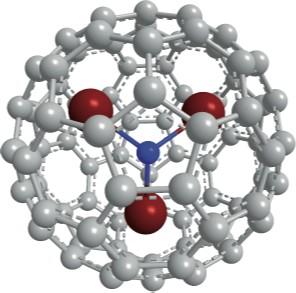