Modern infrared spectrometers use the Fourier transform technique: Instead of a moving grating for wavelength selection in conventional spectrometers, a Michelson interferometer is used. In order to record a spectrum, one of the two mirrors has to be moved, and the resulting intensity change at the detector leads to an interferogram. A subsequent Fourier transformation generates the spectrum. FT-IR and water: Attenuated total reflection (ATR) spectroscopy The investigation of biological samples under physiological conditions implies the preparation of a sample in an aqueous solution. This introduces major difficulties in applying infrared spectroscopy on those samples because of a strong water absorbance in the interesting regions of the spectrum. The ATR technique offers an elegant solution to these problems: an infrared transmissive crystal is used to create total internal reflections of the measuring infrared beam. At the interface to the outer medium (e.g. protein or water) an evanescent wave is formed that probes the sample within a micrometer range and therefore can be used to record an absorbance spectrum of the outer medium. The amount of water overlaying the crystal does not influence the absorption in the measured spectrum, which makes the exchange of the solution with simultaneous observation of the induced changes possible. 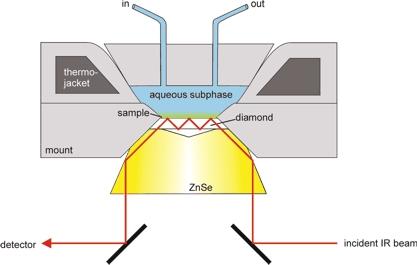 The usual way to achieve higher time resolutions in a FT-IR spectrometer is to enhance the speed of the moving mirror in the interferometer. Due to physical reasons (vibrations, tilting, friction) there will be a limit in terms of speed of the mirror which cannot simply be further enhanced. The result is a limited time-resolution for the spectrometer itself.
To avoid this boundary, the step-scan technique is introduced to enhance the time-resolution down to the nanosecond domain.Here the moving mirror is fixed at a distinct position and a kinetic for one point in the interferogram is collected. After this is done, the mirror is moved to the next position and again a kinetic is taken. When all kinetics of the interferogram points have been taken, the whole collected interferograms will be fourier-transformed to finally obtain the time-resolved spectra with high time-resolution. To get an acceptable signal to noise ratio, some thousand averages for each mirror position have to be measured. 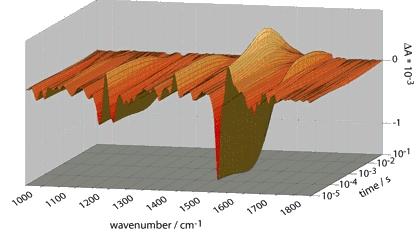