Microbial rhodopins share a 7 transmembrane helix architecture, a fold common also to visual rhodopsins and G-protein coupled receptors. Rhodopsins are also characterized by the presence of a retinal chromophore (chemically related to vitamin A) linked to a lysine through a protonated Shiff base (SB). Retinal light-induced isomerization, generally from all-trans to 13-cis in microbial rhodopsins, starts a cyclic reaction: the photocycle. 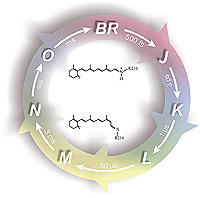 Bacteriorhodopsin. The light-driven proton pump bacteriorhodopsin (bR) was the first identified microbial rhodopsin, and by far the better understood. The SB deprotonates in less than hundred microseconds after green light photo-excitation. This is the first of a series of well characterized internal proton transfer reactions that end into the net vectorial transport of a proton from the cytoplasmic to the extracellular side and the recovery of the ground state. The most controversial aspect of the bR photocycle remains the group the releases the proton to the extracellular side, apparently consisting of a protonated network of water molecules.

Sensory rhodopsin I. Unlike bR, sensory rhodopsin I (sRI) is not involved in energy production but in phototaxis, i.e., in light sensing. Orange light absorption by sRI cause retinal isomerization and formation of the spectrally distinct species S373 with deprotonated SB. This process acts as an attractant signal for the cell, whereas absorption of a second photon (near UV) by S373 leads to a repellent signal. Light-induced conformational changes are transmitted to Htr I, an integral transmembrane protein that is intimately associated to sRI. The communication between membrane proteins is generally little understood, and sRI / HtrI represent model systems for the elucidation of general principles of signal transduction between proteins. 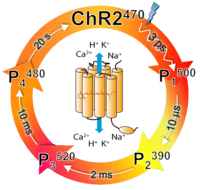 Channelrhodopsins. Channelrhodopsins (ChRs) are the first and so far unique light-gated ion channels found in nature. ChR1 and ChR2 serve as phototaxis receptors in the unicellular green alga Chlamydomonas reinhardtii. Upon light excitation they transiently become permeable to protons and cations (Na+, K+ and Ca+2), allowing for light-controlled depolarization of the membrane potential. When ChR2 is expressed in neurons this property has been used to induce action potentials by light, i.e., optogenetic control of neural activity. ChRs are also unique among all ion channels as their functional mechanism can be studied over the time-scale from femtosecond to seconds via triggering by a short light pulse. ChR2 photocycle consists of four intermediates. One of them, P3520, is well established to be conductive for cations. Work is in progress to reveal how the ChR2 photocycle is connected to cation permeation, as well as to its remnant light-induced proton pump activity. Less is even known about ChR1 photocycle and its functional mechanism.