The response to drugs and pathogens performed by ABC exporters are pivotal mechanisms of cellular self defense, whose malfunction leads to diseases. ABC transporters belong to one of the largest membrane transporter families and are divided into importers, which are exclusive to bacteria, and exporters found in every organism. ABC exporters minimally consist of four domains and exist as single polypeptides or as homo- or heterodimers. Two transmembrane domains (TMDs) span the membrane with a total of twelve transmembrane helices and form the substrate permeation pathway by alternating between inward- and outward-oriented states. A pair of NBDs is connected to the TMDs via coupling helices and drive conformational cycling of the transporter by binding and hydrolysis of ATP, a process which is linked to NBDs closure and reopening.

Yet key proteins’ rearrangements at the membrane lack structural insights, which cannot be obtained solely by crystallography or NMR. By means of cutting-edge EPR methodology, the Bordignon's group aims to unravel the structural and functional properties of the multidrug resistance/TAP subfamily of ABC transporters in membrane environments. The research focuses on the peculiarity of heterodimeric exporters, in terms of asymmetries, and substrate sensing mechanism. 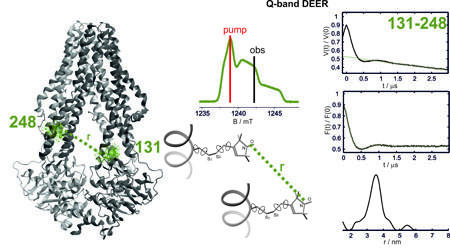 Many ABC exporters are heterodimers encompassing asymmetric ATP binding sites. The degenerate site binds nucleotides tightly but is impaired in their hydrolysis. Thus, ATP is predominantly consumed at the consensus site and ATP hydrolysis often displays positive cooperativity suggesting allosteric communication between the two ATP binding sites. Interestingly, some heterodimeric ABC exporters do not show ATPase activity in the absence of substrate (e.g. TAP1/2) and others show basal ATP hydrolysis even in the absence of substrate (e.g. TM287/288). How nucleotides and substrates communicate their presence to the nucleotide binding domain and to the transmembrane domain is still elusive. We use site-direcetd spin labeling to position spin labels at specific sites in the TM287/288 exporter from the hyperthermophilic organism T. maritima, and follow its conformational changes both in detergent and in liposomes via continuous wave EPR performed both at room and at high physiological temperatures (80°C) and by pulsed methods (DEER) at cryogenic temperatures. The effects of high temperature on the protein's stability and conformational changes are investigated and compared to effects induced on similar proteins from mesophilic organisms.

The project ABC1 is done in collaboration with Prof. Markus Seeger, University of Zurich, Switzerland.


The human heterodimeric ABC exporter TAP1/2 is the target of several viruses seeking to escape immune surveillance. The herpes simplex virus blocks peptide presentation by TAP1/2 causing the permanent recurrence of the oral herpes. By engineering singly- and doubly-labeled ICP47 variants we will solve the underlying molecular mechanism of inhibition. We will first analyze the interspin distance fingerprint induced on ICP47 by the membrane bilayer. Next, we will use wildtype TAP1/2 reconstituted in liposomes and analyze the effects induced on ICP47 responsible for peptide binding inhibition.

Using orthogonal labeling strategies, with Gd-based labels in TAP1/2 and nitroxide-based labels in ICP47, we will selectively study the fraction of ICP47 bound to TAP1/2 and the structural effects induced on TAP1/2 by peptides, ICP47 and nucleotides.

The project ABC2 is done in collaboration with PD Dr. Rupert Abele and Prof. Robert Tampe', Institute of Biochemistry, Biocenter of the Goethe University, Frankfurt am Main, Germany.