The intrinsic apoptosis pathway is orchestrated by the Bcl-2 (B-cell lymphoma-2) protein family: i) pro-survival members (e.g. Bcl-XL) inhibit apoptosis; ii) pro-apoptotic members (Bax, Bak) permeabilize the mitochondrial outer membrane; iii) the BH3-only proteins (e.g. Bid, PUMA) sense apoptotic stimuli and regulate the other two members of the family. Up to now, a satisfactory description of the interaction network between pro-apoptotic and pro-survival players at the membrane is missing. 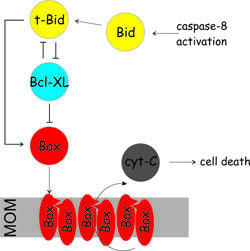 We aim to unravel the conformational changes of each player during initiation of cell death, as well as the protein-protein interactions leading to activation or inhibition of apoptosis. The mitochondrial outer membrane milieu will be mimicked in vitro by liposomes. The use of isolated mitochondria for in-organelle EPR will also be explored.

Project APO1: unveiling the structure of Bax at the membrane

Bax is a Bcl-2 protein which plays a central role in the mitochondrial pathway of apoptosis. Upon activation, cytosolic Bax monomers aggregate on the surface of mitochondria and change conformation concertedly to punch holes into the membrane. The subsequent release of cytochrome c initiates cell death. However, the structure of membrane-inserted Bax and its mechanism of action remain largely unknown. The structure of inactive Bax after spin labeling is comparable to that obtained by NMR, proving that spin labeling does not affect the globular folding.

After activation and membrane insertion, we obtain intra-monomeric and inter-monomeric distances in the active oligomeric membrane-embedded conformation of the protein. The aim is to derive a 3D model of active Bax at the membrane based on double electron-electron resonance (DEER) spectroscopy in liposomes. First successfull experiments performed in isolated mitochondria pave the way for the use of EPR in organelles.

The project APO1 is done in collaboration with Dr. Stephanie Bleicken and Prof. Ana Garcia-Saez, before at Bioquant Heidelberg and now at University of Tübingen, Germany.

Site-directed spin labeling EPR has been applied up to now to membrane proteins inserted in liposomes, membrane bilayers or nanodiscs. The idea is to mimic the native environment. However, the molecular crowding and the lipid composition of each membrane differ tremendously, and may introduce additional still unknown triggering factors which modify the conformaional changes of the proteins under invetsigattion. In cell EPR of site-directed spin labelined proteins is an emerging area, which faces challenges in terms of sensitivity, selectivity and labels' lifetime. In this project we will explore the use of isolated organelles instead, to follow the conformaitonal changes of teh Bcl-2 proteins during apoptosis. Intra- and inter-protein distances in the Bcl-2 network will be obtained in organelle using isolated mitochondria from rat, to directly address the conformational changes under conditions close to the physiological ones. We will test the advantages of gadolinium labels and different types of nitroxide labels in the presence of organelles. Orthogonal labeling strategies will be adopted to follow simultaneously different players at the onset of apoptosis.

The project APO2 is done in collaboration with Dr. Stephanie Bleicken and Prof. Ana Garcia-Saez, before at Bioquant Heidelberg and now at University of Tübingen, Germany.


Due to the partitioning from water to membranes, defining the structure of these players upon conformational change and membrane insertion is difficult. We plan to develop a two to three-orthogonal labeling system to obtain structural insights in the interaction network between three different Bcl-2 proteins at the time. We will start with a two-orthogonal system, using nitroxide-labeled Bax, and Gd3+-labeled Bcl-XL. We will thus follow Bax conformational changes (nitroxide-nitroxide distances), Bcl-XL structural changes (Gd-Gd distances) and the interaction between the two players (Gd-NO distances). We will elucidate the active structure of the Bcl-2 inhibitors and their interaction in the presence of Bax at the membrane. The structural effects of small BH3 mimetics molecules currently in cancer clinical trials on the structure of Bax and Bcl-XL will also be investigated.

The project APO3 is done in collaboration with Dr. Stephanie Bleicken and Prof. Ana Garcia-Saez, before at Bioquant Heidelberg and now at University of Tübingen, Germany.