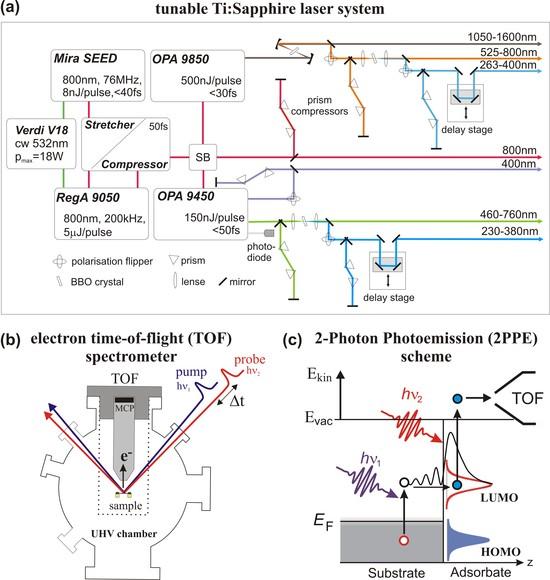 For the 2PPE measurements, femtosecond laser pulses are generated by a 300 kHz Ti:Sapphire laser system which pumps an optical parametric amplifier (OPA) (see Fig. a). The OPA 9450 (visible optical parametric amplifier (VIS-OPA)) delivers tunable VIS pulses (460–760 nm, 55 fs at 150 nJ/pulse); the OPA 9850 (infrared optical parametric amplifier (IR-OPA)) generates ultrashort infrared pulses (1100–1600 nm, 30 fs at 500nJ/pulse). The range of photon energies is then further extended into the UV by second harmonic generation (SHG) in β-barium-borate (BBO) crystals. Frequency doubling of the VIS-OPA output yields 230–380 nm (5.4–3.3 eV). The laser pulses are incident on the surface with an angle of 40° with respect to the surface normal (see Fig. b). While the pump pulse hν1 excites an electron from below the Fermi level EF to intermediate unoccupied states, e.g. the lowest unoccupied molecular orbital (LUMO) at energies E − EF = Ekin +Φ− hν2, (with Φ the work function), the probe pulse hν2 photoionizes the sample by lifting the excited electron above the vacuum level (Evac) (see Fig.c). Note that for the 2PPE experiments it is necessary to avoid direct photoemission and adapt the maximum photon energy to the sample work function. Applying a time delay between the pump and the probe pulse allows to follow the temporal evolution of excited states, i.e., for instance the lifetime of a negative ion resonance. As schematically shown in Figure (b) photoelectrons are detected in an electron time-of-flight (TOF) spectrometer and analyzed with respect to their kinetic energy Ekin. Variation of the electron detection angle α with respect to the surface normal allows determining the electron momentum parallel to the surface. References:
H. Petek, S. Ogawa, Prog. Surf. Sci 56 (1997) 239.
M. Weinelt, J. Phys.: Cond. Mat. 14 (2002) R1099.
X.-Y. Zhu, Surf. Sci. Rep. 56 (2004) 1.
C.D. Lindstrom, X.-Y. Zhu, Chem. Rev. 106 (2006) 4281.
J. Güdde, W. Berthold, U. Höfer, Chem. Rev. 106 (2006) 4261. HREELS is utilized to determine the vibrational structure and adsorption geometry (molecular orientation) of molecules adsorbed on metal or semiconducting substrates. 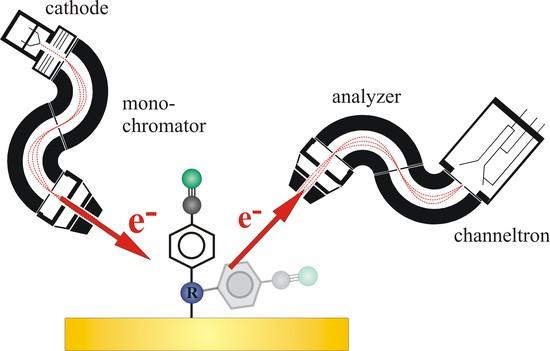 The HREEL spectrometer (Ibach-type) consists of two sub-systems the electron monochromator and analyzer, both with double-pass 127° cylindrical deflectors. A monochromatic electron beam (primary energy usually about 1-10 eV) is directed onto a surface, and the energy distribution of the scattered beam is measured, eventually as a function of the primary energy, angle of incidence or scattering. The electrons in this energy range can effectively excite vibrations of surface atoms or adsorbates. In comparison to infrared (IR) spectroscopy which can also probe vibrations of adsorbed species, HREELS allows to investigate low-frequency modes (< 500 cm-1) which are not accessible by conventional Fourier-transform IR spectrometers. In contrast to IR spectroscopy of adsorbates at metal surfaces, in which only a dipole excitation mechanism is operative, HREELS comprise dipole, impact and resonance scattering. Each of these excitations permit access to different information since different selection rules determine the outcome of the spectroscopic process. The dipole scattering is the most important excitation mechanism of adsorbates in HREELS. It results from the long-range interaction between the electric field of the incoming electron with the dynamic dipole of the adsorbate or surface.  Due to the screening of a dipole on a metal surface, there is a selection rule for dipole scattering, i.e., only vibrations with a component of the dipole moment change normal to the surface are observable. The impact scattering is a short-range direct Coulomb interaction between the incident electron and the ion cores of the adsorbate. The momentum transfer via this mechanism is strong therefore scattered electrons are not concentrated in the specular direction in contrast to dipole scattering. The cross section of impact scattering is about 2–3 orders of magnitude lower than that of dipole scattering. The third type of vibrational excitation mechanism involves the creation of a temporary negative ion and is referred to as resonant electron scattering. References:
H. Ibach, Electron energy loss spectrometers, Springer: Berlin, 1991.
H. Ibach, D. Mills, Electron energy loss spectroscopy and surface vibrations, Academic Press: New York, 1982.

SFG allows to determine the vibrational  structure and the adsorption geometry of adsorbates. In addition time-resolved (fs-time scale) measurements are possible. 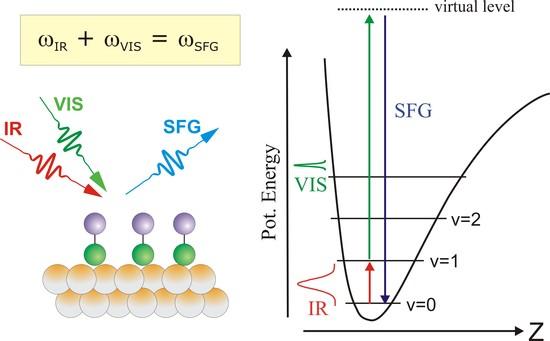 For SFG spectroscopy, a broadband IR pulse (≈150 fs, 20–30 μJ) with a bandwidth of ≈ 200 cm-1 (FWHM) is used together with a narrowband visible (VIS) up-conversion pulse of 7.5 μJ at ωV IS= 800 nm. Both beams are p-polarized and focused onto the sample under grazing incidence of ≈ 75◦. The resulting SFG signal is spectrally dispersed and detected by an intensified CCD camera. Thus, vibrational spectra within a bandwidth of ≈ 200 cm-1can be obtained without scanning the IR frequency. Resonant enhancement in the SFG signal will only occur for frequencies ωIR within the bandwidth which are resonant with a vibrational transition. SFG is a second-order nonlinear process, which is (in the dipole approximation) forbidden in media with inversion symmetry, and therefore intrinsically sensitive to interfaces of centrosymmetric media. References:
Y.R. Shen, The Principles of Nonlinear Optics; Wiley: New York, 1984.
Y.R. Shen, Nature, 1989, 337, 519.
T. F. Heinz, Second-Order Nonlinear Optical Effects at Surfaces and Interfaces, Elsevier, Amsterdam, 1991.
M. Buck and M. Himmelhaus, J. Vac. Sci. Technol. A, 2002, 19, 2717.
M. A. Belkin and Y. R. Shen, Int. Rev. Phys. Chem., 2005, 24, 257.
H.-F. Wang, W. Gan, R. Lu, Y. Rao, and B.-H. Wu, Int. Rev. Phys. Chem., 2005, 24 191. 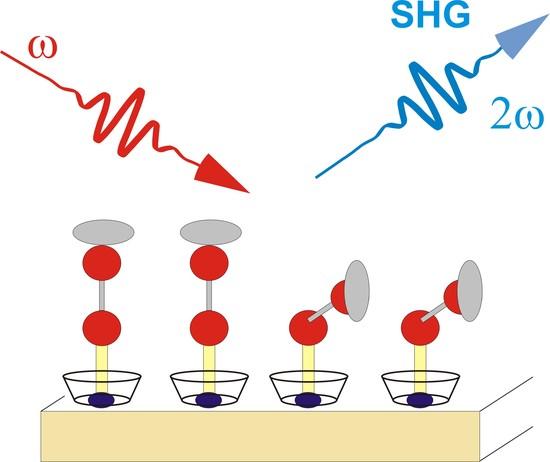 A beam of monochromatic light impinges on a surface. The lack of symmetry at the surface (or a buried interface) can lead to the generation of light at a frequency twice that of the incident light (i.e., the second harmonic). Surface phenomena such as molecular adsorption, aggregation and orientation can be studied, also in a time-resolved fashion.