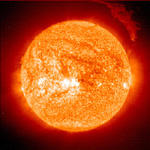 Complex nature of solar forcing and its impact on the Earth's climate is far from being fully understood. For this reason, the largest international solar scientific organization SCOSTEP (Scientific Committee on Solar Terrestrial Physics) has initiated a new program CAWSES (Climate And Weather of Sun-Earth System), with a scope to join all national activities in order to better characterize mutual relations between our planet and the Sun. Following this initiative German Science Foundation (Deutsche Forschungsgemeinschaft, DFG) has announced its high priority program (Schwerpunktprogramm, SPP) SPP 1176 CAWSES in July 2004.

Several Sun-related climate forcing factors have been recognized until recently. Among them the electromagnetic radiation is believed to be the most important one. It carries almost 100% of the solar energy reaching the Earth. Its influence on the energy budget is expressed in terms of so called "radiative forcing" (given in Watts per square meter), which is a net difference between the incoming short-wave electromagnetic energy and outgoing infrared radiation at the top of the troposphere. Radiative forcing is strongly modified by clouds and atmospheric aerosols.

Another important factor are energetic cosmic particles called Galactic Cosmic Rays (GCRs). Although the energy accumulated in their flux is around one million times smaller than the energy of electromagnetic radiation its role in coupling of the Sun activity with the Earth's climate can be of a major importance. For example, a clear correlation between solar cycle related variation of GCRs and cloudiness has been recently confirmed by Danish researchers.

The primary coupling effect between precipitating GCRs and clouds is ionization of atmospheric molecules, which next serve as Cloud Condensation Nuclei (CCN). Quantitative information on concentrations and distributions of such charge particles would be, therefore, very helpful in understanding of aerosol activation processes as well as their influence on cloudiness. Unfortunately, there are few measurement methods of detection of charged atmospheric particulates available and their accuracy leaves a lot to be desired.

Most of them utilize counterflow impactors which are susceptible to probable contact charging during air suction. Misleading artefacts are likely to occur making an accurate determination of droplet charge hardly possible. Moreover, impactor probing must be performed from airborne platforms like air planes and for this reason cannot be continued over longer periods without additional effort.

As our contribution to German part of CAWSES we proposed to develop a novel and unconventional measurement method of charge detection in clouds and aerosols. It is based on a LIDARtechnique. We intend to send powerfull fs-laser pulses into the atmosphere and subsequently detect both elastically scattered light and droplet generated Second Harmonic radiation (SHG). Due to isotropy of air and bulk water the SHG photons can only be emitted from the droplet surface and efficiency of this process increases with applied surface charge. Elastic scattering will be used for characterization of droplets while SHG as a charge sensitive probe. This method will be free of contact charging problem.