Propagation of a TW laser pulse in the atmosphere

Response of air to incoming electromagnetic radiation can be described in terms of induced macroscopic polarization P. In many cases this response is linear (proportional to applied electric field E), however, illumination by a short fs pulse having several tens of mJ energy is capable to induce non-linear response. Mathematically non-linear response of P requirers expansion of effective susceptibility

in a power series. Since in centrosymmetric media like air the condition of P(-E)=-P(E) must be satisfied all even order expansion terms must be a priori set to zero. The first non-linear term includes a third order susceptibility

Dividing it by ε0 and calculating a square root retrieves a modified refractive index of air:

(a) self-focusing and (b) defocusing

The Kerr effect can overcome natural diffraction of the beam initiating its self-focusing (SF). This phenomenon is widely observed with Gaussian or semi-Gaussian beams, for which the intensity distribution forms, so called, converging Kerr-lens (Fig. 1). To estimate the critical power Pcrit of SF the equilibrium between diffraction and Kerr self-focusing is assumed. For air and commonly used laser wavelength of 800 nm Pcrit ~ 3 GW.

The intensity inside self-focusing beam increases with a propagation distance and eventually leads to efficient plasma generation due to Multi-Photon Ionization (MPI) of nitrogen and oxygen molecules. MPI is believed to be a dominant ionization process, because collisions can be neglected in an ultra short femtosecond time scale and intensity required for tunnel ionization is much higher.

Because the MPI rate is a power function of the laser intensity (the power index corresponds to the multi-photon absorption order) the most dense plasma will be created in the central part of the self-focusing beam. In this way the electron density gradient is built, which as schematically depicted in Fig. 1, tends to defocus the beam forming akin of diverging lens counteracting Kerr-lens focusing. Taking into account both Kerr and plasma contribution the effective refractive index of air can be expressed in a form:

Fig. 2 A digital camera image of
multiple filamentation within a
fs-laser beam

Propagation of the fs-laser pulse in the air with modified refractive index is much different compared to the linear propagation. At first, the beam diameter undergoes a gradual transverse suppression initiated by Kerr-lens. Near the focus the E-field rapidly increases and efficient MPI takes place. Arising plasma retards Kerr-focusing and guides the energy in a stable filament, which is clearly distinguishable from the rest of the beam. From this moment small-scale, consecutive convergence and divergence stabilizes the filament sustaining it on distances much longer then its Rayleigh range. If the pulse power significantly exceeds Pcrit not only one, but many filaments are formed (Fig. 2). They are typically randomly arranged and their position is mainly determined by fluctuations of a beam transverse profile. The fluctuations act as micro Kerr-lenses concentrating the energy, which is successively clamped by each of filaments.

It is worth noting that the air filaments are always similar to one another. Their diameter is variable between 70-100 μm. Light intensity inside a filament varies between 1013-1014 W/cm2 and is mainly set by the MPI. Finally, the plasma density inside the filament is approximately 1016-1017 cm-3, which is only two orders of magnitude less than the air density. 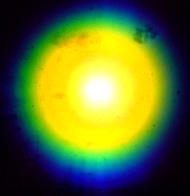