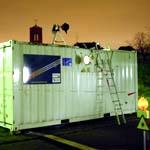 Novel fs- LIDAR applications rely on non-linear propagation of fs laser pulses in air. This type of light progression is characterized by pulse-initiated transformations e.g. self-focusing (SF) or beam filamentation. SF occurs in beams of transverse intensity profile similar to that of Gaussian. Due to the Kerr effect refractive index in the central part of a beam is higher than on its edges forming akin of a positive lens: the Kerr-lens. In the focal point of a Kerr-lens intensity of light reaches the threshold of multi-photon ionization (MPI) resulting in plasma generation. Released electrons lower effective refractive index and similarly to the Kerr-lens a negative plasma lens is created.

Dynamical balance between self- focusing and defocusing guides the light into stable about 100 μm diameter filament, which length exceeds many Rayleigh lengths of corresponding Gaussian beam. The longest filaments can span over several hundred of meters.

The first and for many years the only mobile LIDAR using the phenomenon of filamentation was built for the joint Franco-German research project Teramobile. Teramobile is a state-of-the-art CPA (Chirped Pulse Amplification) fs-laser system delivering pulses of a 4 TW power. Its flexible detection unit was designed to match various types of LIDAR experiments. Receiving telescope uses a F3, 40 cm diameter Newtonian telescope and is followed by two separate detection tracks. The first one is used for spectrally and temporally resolved spectroscopic measurements and consist of a spectrograph and gated ICCD camera. The second is based on classical light detectors i.e. photodioades and photomultipliers. It is usefull for broadband depolarization or scattering probing.

Besides atmospheric applications Teramobile is often involved in other fascinating projects. For example, it was used to demonstrate remote chemical analysis of solid state samples or triggering and guiding of MV electrical discharges.