While propagating in air a powerful femtosecond laser pulse undergoes many self-initiated non-linear transformations, which change its spatial, temporal and spectral properties. Among them probably the most remarkable one is beam filamentation.

Filaments are long and narrow plasma channels formed within the beam cross-section. Their spectral content differs much from that of the laser. In filaments efficient self-phase modulation and plasma generation leads to broadening of the pulse spectrum, which eventually covers the range between IR to UV. This broadening is usually called the supercontinuum (SC) generation.

First experiments demonstrating range-resolved atmospheric absorption spectroscopy using SC were carried out in autumn 1997 in Jena. They revealed clear signature of atmospheric H2O and O2 in the molecular form. The measurement range reached 1 km and the spatial resolution was 250 m.

The success of first experiments raised the idea of the fs-LIDAR. Shortly after a consortium comprising two German and two French universities later on joined by the University of Geneva in Switzerland was established. The main objective was to construct a first mobile femtosecond LIDAR, which could be used for atmospheric measurements, but also fundamental research on propagation of femtosecond pulses. The project was named Teramobile corresponding to the mobile terawatt-class laser system. 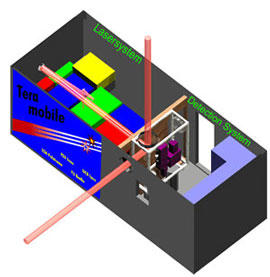 Teramobile was the first (and for a long time the only) fs-class laser system possessing full mobility. This unique feature has recently been copied in several newly created fs-laser systems in Canada and the USA.

The most important part of a Teramobile is its laser. It is integrated in a standard 20 feet ISO container (Fig. 1). The laser consists of Ti:Sapphire seeder (Femtosource Compact, Femtolasers) delivering ~4 nJ, 70 fs pulses of 795 nm wavelength and a CPA amplifier (Alpha 10, Thales). Before amplification the pulses are stretched in time to approximately 200 ps.

After regenerative amplifier pulses pass through the first multipass amplifier. At this stage their energy is further increased to approximately 40 mJ and the final amplification in the main amplifier takes place. The pulse energy after the main amplifier is typically 700-800 mJ.

Leaving the main amplifier the beam diameter is expanded to 5 cm diameter. It is necessary to avoid damage of optical components in the grating compressor. In compressor the pulse duration can be continuously adjusted in the range between ~70 fs-~1 ps. The shortest duration corresponds to nearly Fourier-limited pulse. The laser setup was depicted in Fig. 2.

On the detection side Teramobile uses a f=1200 mm, F3 Newtonian telescope. It is coupled with Czerny-Turner spectrometer (Chromex 500 IS/SM) and ICCD camera (PI MAX 1024HQ, Princeton Instruments). The camera can be triggered with a selectable delay and gate relative to a laser pulse. Alternatively, the telescope can be coupled with a photomultiplier. In this configuration a variety of short-, long- and band-pass filters or even a small monochromator allow to perform measurements in desirable spectral region of supercontinuum.

Detection unit of Teramobile has been proven its flexibility in many non-atmospheric experiments. For example, successful experiments on plasma emission spectroscopy with targets situated up 150 m away from the container were carried out. Since filaments were used to induce plasma this novel approach was called R-FIBS (Remote Filament Induced Plasma Spectroscopy). Contrary to classical LIBS (Laser Induced Breakdown Spectroscopy) limited by diffraction of focused laser beams to 30-50 m, the only limitation of R-FIBS seems sensitivity of used detection. As it is well known the non-linear nature of filaments assures their diffraction free propagation up to 1-2 km. Until now, R-FIBS detection of copper, iron and aluminium was demonstrated. The other groups have, however, extended this technique to other substances.

More than 20 scientific papers resulted from the Teramobile project. They were published in the top-ranked journals, including: Science, Physical Review Letters, Applied Physics Letters and others.